Anthropoids (e.g. Adam in Book of Genesis or the golem of Jewish lore) made from clay and created without human womb by a magician, or by God. (arcade.stanford.edu)

Therefore the Philosophers have created a Phenix, and Salamander. For if it were done by the conception of two bodies, it would be a thing subject to death; but because it revives it self alone, the former body being destroyed, it riseth up another body incorruptible.

[Maier] saw the perfection of it [the hermetic “work”] in the birth of the Philosophic Stone in the Sacred Nativity; its sublimation in the life and passion; dark and black in death; then in the resurrection and the life, the red and perfect colour. This comparison is found in the nativity, life, passion, death, and resurrection of Christ as commemorated in the Eucharist. Thus earthly things are the pictures of the heavenly, “Lapis itaque ut Homo.”

By creating an anthropoid, the Jewish master is not only able to display his creative forces, but may attain the experience of the creative moment of God, who also has created man in a similar way to that found in the recipes used by the mystics and magicians. Paraphrasing a statement of Glanvill, we may describe the Golem practices as an attempt of man to know God by the art He uses in order to create man.

Der Golem is a 1915 German silent horror partially lost film, written and directed by Paul Wegener and Henrik Galeen. It was inspired by an ancient Jewish legend, the most prevalent version of the myth involving 16th century Rabbi Judah Loew ben Bezalel who created the Golem to protect his people from anti-Semites. Wegener claimed the film was based on Gustav Meyrink‘s 1915 novel The Golem, but Troy Howarth states “it is more likely that (the screenwriters) simply drew upon European folklore”.

The film was the first of a trilogy produced by Wegener, followed by The Golem and the Dancing Girl (1917) and The Golem: How He Came into the World (1920).

In modern times, an antiques dealer (Henrik Galeen) searching the ruins of a Jewish temple, finds a golem (Paul Wegener), a clay statue that had been brought to life four centuries earlier by a Kabbalist rabbi using a magical amulet to protect the Jewish people from persecution. The dealer resurrects the golem as a servant, but the golem falls in love with Jessica (Lyda Salmonova), the dealer’s daughter. When she does not return his love, the golem goes on a rampage and commits a series of murders.

Co-writer/co-director Henrik Galeen played a major role in the film (which was unusual for him) and years later went on to co-create other silent horror classics, such as F. W. Murnau’s Nosferatu (1922) and Paul Leni’s Waxworks (1924).

Actress Lyda Salmanova went on to marry Paul Wegener, and was his widow at the time of his death.

The few surviving clips from this film show Wegener in a costume almost identical to the one he used in his later 1920 version, and “show him stumbling around in a manner he would repeat in the later film”, according to Troy Howarth. 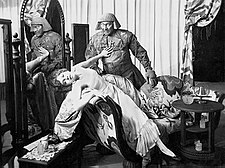 The Deutsche Kinemathek film archive possesses “108 meter fragments”. While many sources consider it a lost film, silentera.com states that a “print exists”, and Professor Elizabeth Baer notes in her book The Golem Redux: From Prague to Post-Holocaust Fiction that Donald Glut claimed in The Frankenstein Legend that “European film collector” Paul Sauerlaender tracked down “a complete print” in 1958; Baer is careful, however, to point out that “Glut provides no source for this information.”