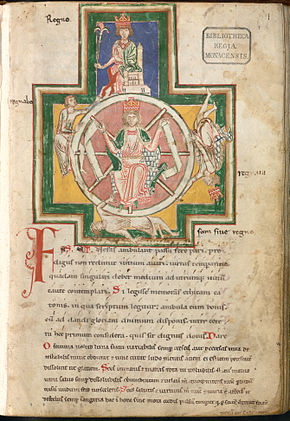 “O Fortuna” in the Carmina Burana manuscript (Bavarian State Library; The poem occupies the last six lines on the page, along with the overrun at bottom right.

“O Fortuna” is a medieval Latin Goliardic poem written early in the 13th century, part of the collection known as the Carmina Burana. It is a complaint about Fortuna, the inexorable fate that rules both gods and mortals in Roman and Greek mythology…

Music and the Holocaust: Orff, Carl

Carl Orff remains something of an enigma in the musical history of Nazi Germany.  As an artist, the odds seemed stacked against him when the Nazis came to power: it was expected that the composer would become yet another victim of the Third Reich’s oppressive cultural policies.  Yet Orff managed to establish a place for himself and his music within Nazi Germany.  Like that of Paul Hindemith and Ernst Krenek, Orff’s music was often categorized as ‘degenerate’.  But the artist’s attempts to ingratiate himself with the regime paid dividends.  By the early 1940s, his music was celebrated by many Nazi elites, and his Carmina Burana was one of the most popular pieces in Nazi Germany.

Here they are again, translated into English:

O Fortune,
like the moon
you are changeable,
ever waxing,
ever waning,
hateful life
first oppresses
and then soothes
as fancy takes it;
poverty
and power
it melts them like ice
fate – monstrous
and empty,
you whirling wheel,
you are malevolent,
well-being is vain
and always fades to nothing,
shadowed
and veiled
you plague me too;
now through the game
I bring my bare back
to your villainy
fate is against me
in health
and virtue,
driven on
and weighted down,
always enslaved.
so at this hour
without delay
pluck the vibrating strings;
since Fate
strikes down the strong man,
everyone weep with me!